I know that I already work a blog about The Queen’s Gambit, but I still haven’t gotten over how amazing this Netflix series is. And to be completely honest, I think I’m suffering from some withdrawal symptoms from watching the series.

I probably should have rationed how many episodes I watch every day but I couldn’t stop myself, I just raced through all of them in a day.

Not the most productive use of my time, but it was so enjoyable! Haha.

Anyway, I was so inspired by Anya Taylor-Joy’s character, Beth Harmon, that I became curious to what Beth Harmon would hypothetically write in a Chess scholarship essay.

So to scratch that itch, I decided I’ll give it a go in writing it out. All of this is fictional of course and even the scholarship prompt is made-up, but bare with me. I think I did a pretty good job channeling Beth Harmon’s essence into this essay.

And in my next blog post, I’ll break down this fictional scholarship essay I wrote and explain to you why it works and how you can write essays like this for your future scholarship applications!

Please tell us what chess means to you.

If I concentrate hard enough and stare intently at the orphanage’s ceiling, its dull gray panes slowly transform into black and white uniformed squares that resemble a full chessboard.

Then with a snap of the mind, all my pieces including my most prized Queen, bishops, and knights emerging from the chessboard – hanging down from the ceiling like a set of inverted Greek columns.

Once the board is set, I play a dramatic game in my mind by whisking all the pieces black and white into position, building up my defenses, and commanding the entire board.

This was how I used to practice chess. I would obsessively play in my own mind over and over again. In just 64 squares, chess was an entire world – my world.

Chess became my refuge from a life of trauma when I lost my mother in a devastating car accident when I was 8 years old. It was the flicker of light in the looming darkness when I first arrived at the orphanage. And the experience of winning provided me with a sense of safety, predictability, and control that was absent in my life.

But as much as Chess was about winning and being a safe haven for me, it also taught me a great deal about losing. It was only when I lost some of the most important and high-profile matches in my career did it force me to reconcile with my past and to confront the traumas that continue to haunt me.

Like a dear friend, Chess was the only thing that could force me to be painfully honest with myself while also giving me the courage to break through.

The more I healed from the grief of losing my mom, the heartache from losing my step-mom, and to survive in a world where I often felt powerless was the better I became as a Chess player. I transformed from an intuitive player to a studious player and came back to win the Moscow Invitational (1968) —  becoming the world champion at age 20.

My relationship with Chess has continued to evolve since then. And it taught me a lot about what it meant to be different.

Everything I did was politicized. I was a young woman in an otherwise male-dominated sport. I was more “bloodthirsty” than I was a hard-working chess player. I was the Chess prodigy taking down seasoned grandmasters. I was the American that didn’t make public statements against communism before accepting a match against the Russians.

But just like a good chess match “where you know the likely outcome, but you play it out just to see what could happen,” I played on to challenge these norms. I tackled stereotypes to expand the possibilities of Chess and extended its accessibility to youth, women, and other fellow Americans.

Chess is to me as life is to me. Sometimes it’s all about competition, but other times, it is about being in the game, exploring its infinite creations, and embracing all its beauty that can unfold in your life.

And there you have it! I know this isn’t a long essay and it doesn’t look like a lot of work. But man! It actually took a lot of effort to “get into character” and find the right voice and tone to write an essay as if I was Beth Harmon.

But it was super fun! And I hope you guys enjoyed it. Stayed tuned next time where I’ll analyze this essay and break down its components to show you how you can write scholarship essays like this too! And win a TON OF MONEY! Haha.

Special thank you to Netflix for creating such an amazing show, for Anya Taylor-Joy for bringing such a unique character to life, and for Fandom.com for compiling such a detailed wiki fan page for Beth Harmon. You have no idea how much that helped me in understanding Beth Harmon’s history and achievements. 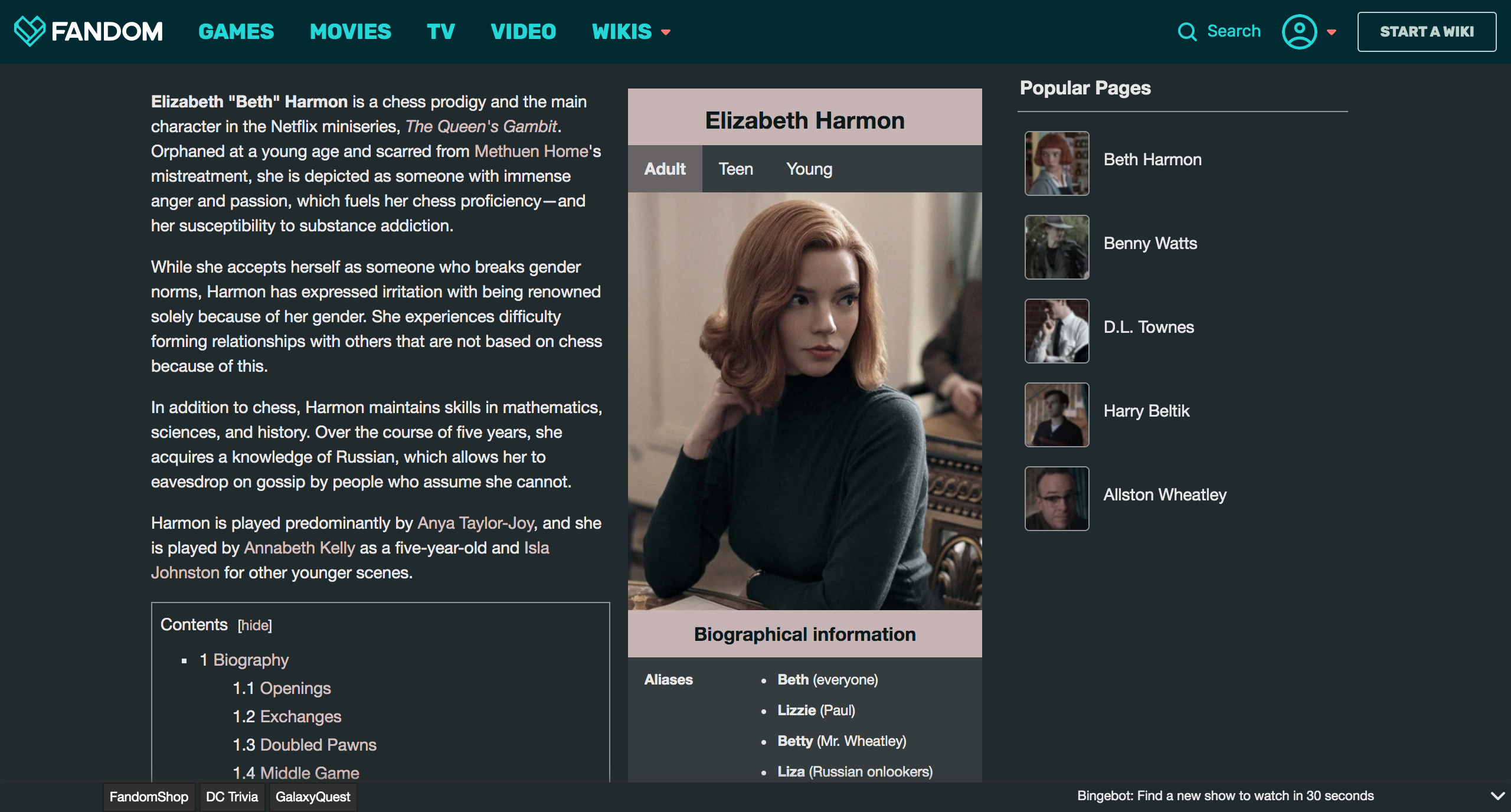 If you enjoyed this blog and would like me to write about another TV character (either fictional or real) then make sure you leave me a comment!

I’ll catch you next time!

Facing Your Fears: What Sam Smith’s Story Can Teach Us About Writing A Scholarship Essay